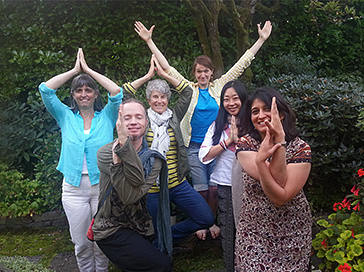 Yasodhara Yoga has long been a part of the Lower Mainland.

Swami Radha founded her first ashram, and the first ashram in Canada, in an old house in Burnaby in 1958. Along with a group of young people interested in yoga, she also started the first metaphysical bookstore in Vancouver, the Yoga Vedanta Bookshop, which was located on Robson Street. In 1963 she founded Yasodhara Ashram at its present location in Kootenay Bay, BC.

Swami Radha’s teachings continued to thrive in the Vancouver area, with a centre that operated in South Burnaby in the 1990s, and Radha Yoga & Eatery, a beautifully restored century-old brick building in the Downtown Eastside, which was popular with both vegan eaters and yogis from 2003-2010.

Yasodhara Yoga Vancouver now operates our of Vancouver in various locations and has teachers across the city who offer classes in Hatha Yoga, Kundalini and Dream Yoga, as well as a monthly satsang.

Founded on the principle of Karma Yoga, the yoga of action, we are operated by a core group of dedicated teachers and students of Yoga. Karma Yoga is an approach to living that is exemplified at Yasodhara Ashram, and it is the principle that keeps our offerings alive. Our teachers offer courses, workshops and satsangs to the community in this spirit of service, rather than as a commercial enterprise. All fees are given back to the centre or to Yasodhara Ashram to support the work. We are most delighted to have gathered a thoughtful group of Karma Yogis who contribute everything from teaching classes to making candles for our altar.

We welcome you to these very special teachings, which have been rooted in the Vancouver area more than 50 years.